Guyana, a country in northeastern South America. Georgetown is the city and capital of Guyana. 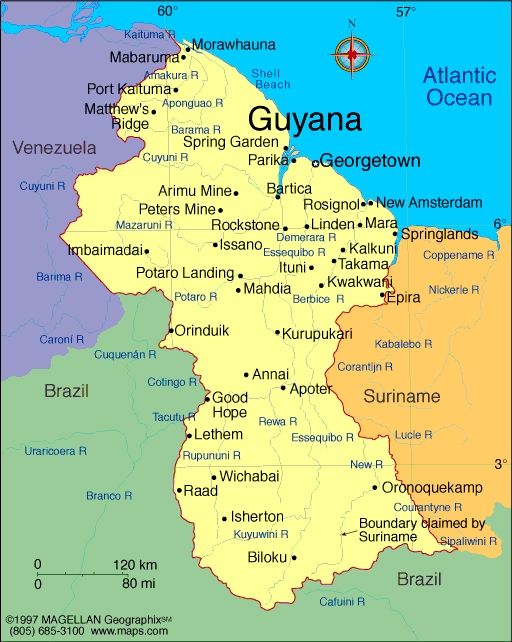 Guyana can be divided into four main geographical areas: There is a narrow and humid coastal plain and a hilly and sandy area in the east. Rupununi Savannah (15,000 square kilometers) in the south and tropical rainforests and the central highlands in the Midwest. The mountains of Guyana include Pakaraima, Kanuku and Acarai. Many of these relatively low mountains are located on steep cliffs. Numerous waterfalls, including the huge Kaieteur waterfall. The Kaieteur waterfall itself is 251 meters high and one of the most powerful waterfalls in the world. It is five times Niagara Falls and twice as many as Victoria Falls. Guyana is a land of rivers. Some of them flow north into the Atlantic, while the east flows west of the country in Esquibo.

The culture of Guyana reflects the influence of Indians, Nepalese, Indians, Chinese and Africans as well as all aspects of Britain, the Netherlands, Portugal and Spain. Guyana is still considered a Caribbean country despite South America. This culture is very similar to the West Indies, especially in coastal areas. The visual arts are flourishing and local artists have created famous sculptures and paintings that can be seen throughout Georgetown. Guyana's traditional music combines European, Latin American, African and indigenous influences. Caribbean reggae, soca, chutney and American pop dominate the music world. Football and cricket are the main outdoor sports for locals, while dominoes are popular indoor sports. Complex secondary sports such as table tennis, lawn tennis, netball, squash, boxing and rounds are widespread.

Places to visit in Guyana

Georgetown offers a vibrant city life. Colonial architecture dominates the architecture of the city and tells the Dutch and British history of the city. In Kaieteur National Park on the Potaro River, Kaieteur Waterfall is surely the most precious natural wonder of Guyana.