Finland is a country in Europe. Helsinki is the capital of Finland. 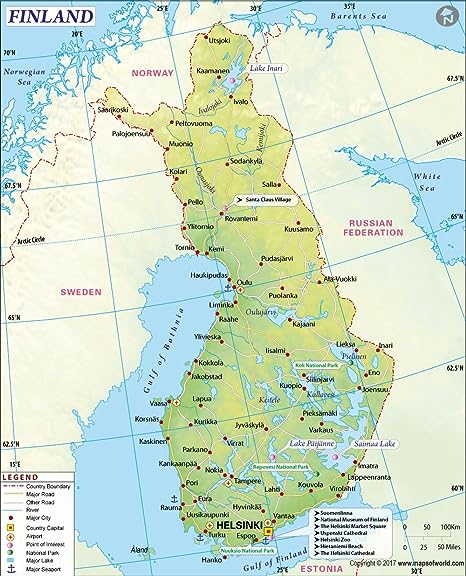 Finland is covered by thick layers of ice. Finland is a flat country, more than 70% of which are covered by dense forests. In the south, water seems to be more abundant than land because there are countless clear lakes everywhere. North of the Arctic Circle the terrain rises to the hills and low mountains of Lapland. The highest point in the country, Haltiatunturi, is 1,328 meters high and lies on the edge of the border with Norway. The Aland Islands lie in the middle of Botnia Bay between Finland and Sweden. It contains nearly three hundred islands and more than 6,000 small rocky islands. There are literally tens of thousands of islands in the east of the archipelago, merged with the Åland Islands and the southwestern coast of Finland, most of which are small islands, some of which are home to large islands. The largest lakes include Nasijarv, Oulujarvi, Paijanne, Pielinen and Finland's largest Lake Saimaa. With few exceptions there is little space for Finnish lakes. The most important rivers in Finland are Kemi, Luiro, Muonio, Oulu, Teno and Torne.

Finland is one of Europe's most united countries in terms of ethnicity and culture. Nevertheless, the Finns quickly absorbed the ideas and dynamics of Russia, the rest of Scandinavia and the European continent, especially in the fields of art, music, architecture and science, but in any case these effects. It has developed into a typically Finnish form.

Places to visit in Finland

The capital Helsinki is usually the first port of call. Surrounded by the archipelago of the 330 islands. Rovaniemi is one of the winter wonderlands best suited for winter visits.

Finnish and Swedish is the official language of Finland.