Estonia is located in northeastern Europe. Tallinn is the capital of Estonia. 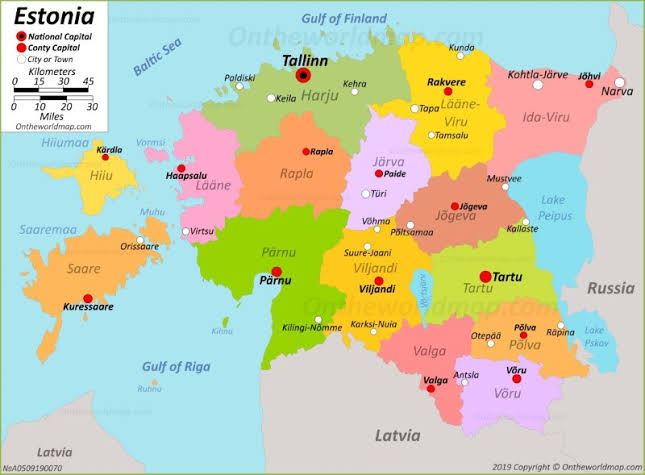 The country Estonia is almost completely surrounded by water, low and shallow (near the sea level). Estonia has a 3,794 km long coastline with countless bays, straits and entrances. The number of islands and islets is estimated at about 1,500, most are small islands with some large islands off the west coast. The middle and southern part of the country is hilly and rises to the highest point - Munamagi - at 1,042 feet (318 m). The average height of the land is only 50 meters. There are more than 1,400 small lakes in the west. The largest lakes are Peipus and Pskov (together with Russia) and the Vorts Jarv Lake. The big and small rivers include Emojogi, Manamagi and Parnu.

Estonia is rich in folk songs and dance cultures, colorful handicrafts, wooden saunas and rustic cuisine. Experience the traditional and modern aspects of Estonian culture in these markets, workshops, museums and festivals. Estonia has had a unique culture for thousands of years. In the middle Ages, the streets of Tallinn were full of merchants and were traded in distant parts of Europe.

Places to visit in Estonia

The magnificent climb to Toompea Hill marks the magnificent capital of Estonia. In the city center, the orthodox onion dome and the medieval fortress are composed of a strange mixture of winds. The Lahemaa National Park is undoubtedly the most famous attraction in Estonia. This park is an hour's drive from the capital and an ideal day trip. Saaremaa is the best attraction in Estonia. The island has a history of 8,000 years. It has been ruled by Swedes, Danes, Russians and Germans for many years. Visitors who come here spend time in the capital of the island.

Estonian is the official language. It is used by about 1.1 million people, with Finnish being the most similar.