On El Salvador map, it is a small country in Central America. San Salvador is the capital of El Salvador. 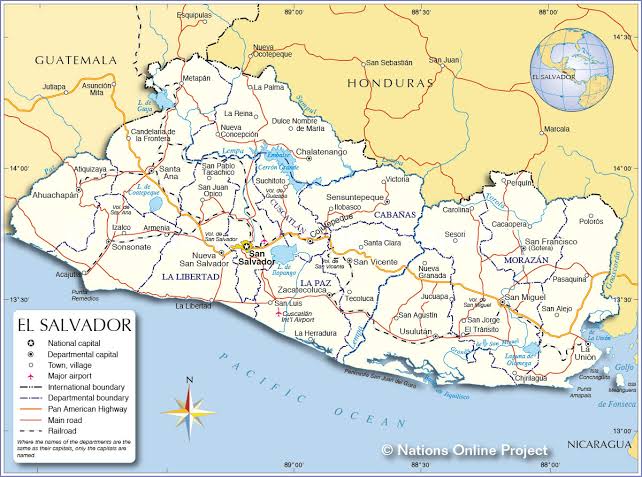 El Salvador is located in Central America. It has a 307 km long coastline along the Pacific Ocean and the bay of Fonseca between Honduras and Guatemala. El Salvador's terrain is mainly mountainous, but the country has a narrow, relatively flat coastal zone and a central plateau. The highest point in El Salvador is the Cerro el Pital (2,730 m) on the border with Honduras in the north of the country.

El Salvador's culture is characterized by a mixture of Indian and Latin American culture. El Salvador enjoys the cultural heritage of the country. El Salvador's cuisine is influenced by American and Spanish cuisine. Corn dominates most of the Salvadoran dishes. Although the traditional Salvadoran society is essentially patriarchal, today there are a large number of Salvadoran women belonging to the country's workforce.

Places to visit in El Salvador

Playa El Tunco is a trendy two-street city popular with backpackers and surfers. Suchitoto is a former colonial city and today the cultural center of the country. Art and food festivals take place all the time and the streets are full of tourists from all over the country. Ruta de las Flores is a path that leads visitors through some of the beautiful villages of El Salvador. Ilopango Lake is a crater-filled crater lake in the center of Salvador. The national park is full of mountains (the highest is 2,418 m high, El Trifino), valleys and dense treetops.

Spanish is the official language of El Salvador.